Mysterious object or planet moves over the sun on SOHO imagery

– NASA has no explanation or announcements on what this could be so we can only guess that this is another planet moving past the SOHO imagery. The question is what planet could this be? Is it a astroid, Venus or Mercury maybe?
Something did move past the sun, people online believe it could everything from the “nibiru” / planet x theory to a camera anomaly but no one has come out with an official answer yet.
That planet scientists talked about a few days ago, throwing ice bullets and causing chaos on earth, maybe he came for a visit. Full story:
http://fromtheold.com/news/space/mysterious-object-or-planet-moves-over-sun-soho-imagery-20906
–  Gigantic hidden planet could be hurling comets at the rest of the solar system… Far away in the frozen outermost depths of our solar system, there might be a hidden planet four times the size of Jupiter. This secret companion to the Sun could be responsible for sending comets into the inner solar system. Full story:
http://io9.com/5704871/gigantic-hidden-planet-could-be-hurling-comets-at-the-rest-of-the-solar-system 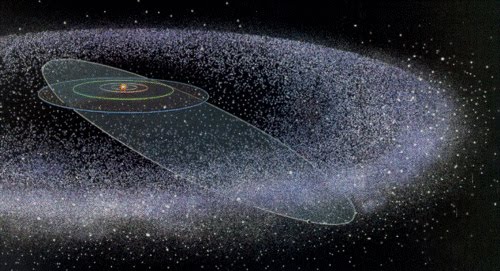