“The Case That May Give Us Answers”
Chupacabras Attacks in Argentina 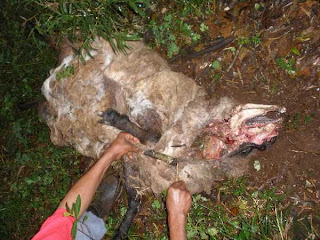 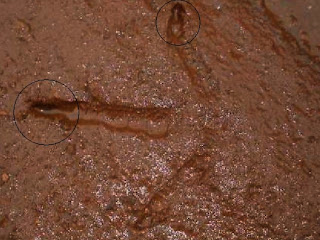 On few occasions in this investigation have we had all of the elements on hand to finally reach some conclusions on this phenomenon. First, to bring our readers up to speed, we shall provide you with backup information on the story.

News Item From the Misiones Media:

Ten sheep were mortally attacked in recent weeks in a livestock farmer’s field in this locality, according to eyewitness information presented to the Sheriff’s office, the body that has been investigating the strange event that has shaken the residents of this rural area.

Since the attacks occurred on two occasions and always at night, the caretakers, farm employees and Police officers have set up a rotating watch against the possibility that the strange animal may reappear again. It left sufficiently clear prints to increase suspicions that the police prefers not to encourage for the time being.

Jose Fraga, owner of the field and the animals, decided to report the happenings to the Police, and while he wanted to file a complaint, the authorities made him desist for the time being, saying “against who would the complaint be filed?” according to clarifications issued by the police department.

Fraga explained that near one of the pens in his field, he found a large, deep footprint with three long toes.” Like that of a bird, but somewhat larger,” he said, and with regard to the injuries to the animals’ bodies, he added: “The all had bite marks on their necks.”

Andres Gonzalez, Sheriff of Campo Viera, confirmed that the attacks occurred twice and that “it is truly remarkable that the animal did not devour any of the sheep. It merely killed them by biting their necks, and blood was only found in that area of the body. There was nothing found in the rest of their bodies.”

The sheriff noted that he had gone to Fraga’s field in person with others to see the event for himself. “Sheep carcass samples were removed, because there were traces of mucus and its possible to determine what attacked these creatures, and we will know in a few days,” he explained. “Many people are saying other things, but we have to wait and avoid jumping to conclusions. We really don’t know what it may be, because a puma or a yaguareté would’ve devoured one of the animals. But in this case there are 10 dead sheep and none of them were touched, only to slay them…” said González.

The figure of the Chupacabras began to acquire shape in the locality, and cows exhibiting strange bite-marks were found en in Campo Grande, attributed by connection to the strange animal that has kept the owner of dozens of sheep and top-quality cows in a state of restlessness.

In the Ninth Section

Fraga’s field is located in the Ninth Section of Campo Viera, some four kilometers away from the town center of the locality at the province’s heart, practically attached to Oberá. Yesterday, Miguel Figueredo – caretaker of the 175 hectare spread – was startled by the events and for the time being cares for the two sheep and one cow that survived the attack. “The sheep have injuries to their necks, they’re clinging to life…they don’t drink or eat, they’re in poor shape. The cow has bites on its teats and I heard over the radio that other cows had been injured in the same area over in Campo Grande…” he explained, somewhat frightened.

“It’s as though all of the blood had been sucked out. The vet that came here, cut one of them (the sheep) and not even water came out,” he added without hesitation.

In Fraga’s field, featuring a ranch up high, there are currently 18 sheep and 50 cows, some of them nursing young. “That’s why we’re keeping a night watch with the police, because there are many animals and we have to look out for them.”

Most of the sheep chosen by the so-called Chupacabras were pregnant, increasing uncertainty about the creature that is loose in the area.

Veterinarian: Arno Stockmanns
Animal Owner: José Fraga
Number of Deceased Animals: Ten (10)
Animals Surviving the Attack: Three (3) Sheep
Carcass Description: Ten (10) Sheep were mortally attacked, with exact incisions in their necks, bodies exsanguinated. The attacker injured two more specimens and a cow’s udders. The strange animal’s attacks were exact in jugular area. In a matter of minutes, it drained the blood from each slain animal.
Crows and caranchos (vultures) fly over the carcasses without coming near the injured parts, as if repelled by something. Other parts of the carcass, however, have been eaten.
A three fingered print was found.
Ants advanced over the sheep carcasses, but turned back upon reaching the neck area.

Antibiotics have been unsuccessfully administered to one of the surviving animals in an effort to halt the infection process: Irondel every 48 hours. Veterinarian Penz from the City of Oberá tested other antibiotics which have hitherto yielded no results.

Based on the photographic material received from the animals’ owner, the following patterns have been identified:
1) Acknowledged bovine cattle mutilations – incision with exposure of the jawbone, removal of tissue, tendons, ligaments and hide. Incision made to the larynx without hyoid bone extirpation.
2) Incision to the animal’s nose area.
3) Marks on the animal’s back with wool removal.
4) Deep incision to the neck area with apparent exsanguination.
5) Lacerations on one specimen’s face.
6) Circular cut with nasal injury in another specimen.
7) Incised cut on the outer ear.

1) Well-defined, three-clawed marks were found near the carcasses (similar to those of a very large bird, approximate length of 18 centimeters) which were well-marked due to terrain conditions.
2) Another element observed is the strange behavior of the ants, which invaded the body but died upon reaching the level of the injuries.
3) A deep incised cut on the animal’s hide was found. There is the possibility that the animal was “impaled” to hold it down when producing this cut.

This case was consulted with Dr. Alberto Pariani of the National University of La Pampa, not only with regard to the injuries, but as how best to work with the surviving animal, which now displays a process of infection that has not been controlled, despite the veterinarian’s efforts. New antibiotics were suggested, and we are awaiting reports on their effect.

It should be highlighted that local authorities have behaved hesitantly in this case. We believe this is due to an inability to find a satisfactory conclusion to the events.

It is important that they intervene in the case, since the possibility of catching this creature alive makes it a very important item of research in finding a satisfactory answer through scientific means.

We are trying to find a way of getting the surviving specimen to the University of La Pampa, which is difficult due to the lack of financial resources to convey it.

The case remains open, awaiting the conclusions of the forensic authorities of Oberá, which we shall consult if the animals’ owner does not provide us with a reply.

Our thanks to the Community Leader of Campo Viera, Mr. Juan Carlos Rios, and the animals’ owner, Mr. Jose Fraga, for their help and for reporting the case.