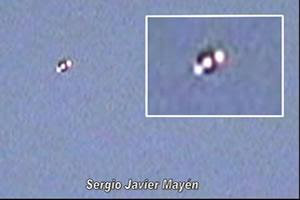 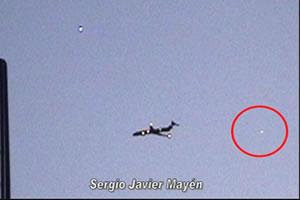 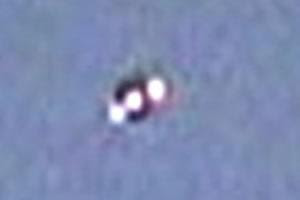 The following photos (vidcaps) belong to the extraordinary recording made by young Sergio Javier Mayén, who managed to capture two unidentified flying objects with his video camera as they flew over Colonia Torre Blanca, Mexico City, on October 21, 2005 at 18:26 hrs. Given the importance of the images, I visited the witness at his home to interview him and conduct an on-site investigation.

Ana Luisa: Hello Sergio. How old are you and what do you do?
Sergio: I?m 16 years old and study at a vo-tech. I want to be an architectural engineer.

AL: Could you please tell me about your October 21st experience?
Sergio: Well, that afternoon I went up to the roof with my sister Melissa, who was playing there. It was she who told me that there was a UFO in the sky. We both watched a reddish-hued orb, and I went downstairs quickly for the camcorder.

AL: Did you manage to record the red orb?
Sergio: No, it wasn?t possible, because when I went back to the roof, the red orb wasn?t there anymore. Then I turned to the right to look for it and came across another UFO, with a brilliant spherical object at low altitude, static in the heavens. Since my camera was ready, I was indeed able to record it.

AL: So what happened later?
Sergio: After recording the orb and taking some photos of it, I realized that a plane was about to fly over and I decided to widen the shot to show the reference. During the first moments of the video, only one UFO can be seen. Shortly after, another appeared in motion.

AL: How did this object move?
Sergio: It moved very slowly and rising toward the zenith. For that reason I was sure that it couldn?t be an airplane or any known object.

AL: Can you describe it?
Sergio: Sure. We could see that it was a black, round object surrounded by smaller, really bright orbs.

AL: How long did the sighting last?
Sergio: About three and a half minutes, I think, approximately, since the UFO was rising really fast into the sky. It was faster than an airplane.
It?s also important to tell you that some things appeared in the original video that crossed the path of the UFO. Some white orbs can be seen, and another longer black-colored object, passing at great speed, and it can only be seen when we put the camera in slow-mo.

AL: Is this the first time you?ve seen a UFO?
Sergio: No, because I?ve seen them before and even managed to record one with my cellphone, but I don?t have that video anymore because my sister erased it. I remember that I was talking to a friend about the sighting I had in Guanajuato and I lifted my arm to point how high the UFO was. Then we both looked at the sky and found a luminous sphere.

AL: Do you engage in routine sky watches?
Sergio: Sure, since I was little I?ve been looking at the sky, and when I see something weird, I focus to determine if it?s a UFO or something known.

AL: What are UFOs, in your opinion?
Sergio: I don?t know, but maybe they could be humans from another dimension with more advanced technology that can travel through dimensional doorways to get here, to research. For example, I saw a documentary about helicopters being reported during the First World War, and that?s unusual, because they didn?t exist back then, so we can?t think that those helicopters were aliens, right? So that?s what makes me say that maybe we?re the UFOs, but from another time, although I think there can be life somewhere else in the universe. It wouldn?t be logical for us to be the only ones. UFOs are something we don?t know very well, but we know they exist.

A remark by Mr. Javier Mayén, father of the witnesses

I think it?s important to highlight that my children had their sighting the same day that Hurricane Wilma hit Mexican territory on October 21, 2005…I?m not sure if there?s any relation between these events, but it?s relevant to researchers who study the possible connection between UFOs and natural disasters.?

The video has an approximate duration of 3 minutes and was taken with a digital Sony Handycam, Mini-DV format, model DCR-HC15. The evidence was recorded with a manual focus and using the 10x optical zoom. The audio is clear and the conversation between brother and sister can be heard, showing great excitement between both witnesses.

After carefully reviewing the images frame by frame, I verified that the second UFO was not present during the first moments of the recording, considering that it appeared suddenly within a time period estimated at a 30th of a second.
The UFO presents well-defined outlines, according to the filters applied with the Corel Photo-Paint 10 program.
The object?s morphology, illumination and movement correspond to the description given by young Sergio Mayén. Reviewing the final part of the video, and using an electronic zoom, I noticed that the UFO modified its shape at a great height, transforming into two red lights that subsequently became one. This information coincides with Sergio?s narration, who states having first seen a red flash as the orb went away from his visual field.

From the foregoing, I believe that the material analyzed is genuine and represents solid evidence regarding the presence of UFOs in Mexico. Without question, Sergio Javier Mayén has developed the sensitivity and skill needed to record the enigmatic videos that plow the skies of our country on video, and he will surely continue to surprise us with their extraordinary sightings.