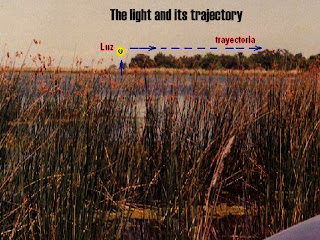 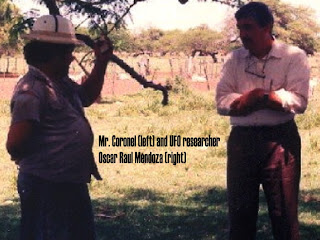 Mr. Juan Coronel, 35, is a married man with children, an expert in farm duties, with primary studies, average height and robust build. He works as a “puestero” (farm overseer) caring for cattle, horses and sheep in a field belonging to the Favaro Brothers. He lives in a comfortable home on the premises with his family. The property, covering some 2000 hectares, is located 60 km NE of the city of Santa Fe along provincial road No. 1. Access from the east is 4.4 km. along a long dirt road that extends from a westward cattle gate on the road, called “Entre Campos”, as it serves as the access route to other neighboring fields. As from the first 3.7 kilometers, and along a 670 km stretch, it crosses a pond, flooded by recent rains, that has a sort of sewer to drain water away. It is necessary to go two kilometers along the dirt road – flooded in parts– beyond the Favaro’s cattle gate, to finally reach the home of Juan Coronel, the farm overseer. We went there with Antonio Pino, a friend and colleague, aside from being an expert photographer, in the company of Mr. Francisco Favaro, one of the field’s proprietors.

At that time, Mr. Coronel was engaged in looking after a flock of sheep in a nearby pen. Seeing us arrived, he approached to greet us courteously. We were introduced by Mr. Favaro, who advised him of the motive and interest of our visit, to which he was more than receptive.

“…That night I was on horseback, riding through the entrance road, the “entre campos” around 21:30 hours when upon reaching the sewer, I looked toward the woods, toward the left, and saw a light emerging from the pond. It looked like a flashlight. I thought it might by hunters, since they tend to frequent this area. But the light rose a few meters, became larger, lighting up the woods, almost like daylight, and it started moving to the right over the treeline to stop on the road on which I traveled. It was some 300 meters away, very near the entrance of the field I look after, and through which I had to enter.”

“The light’s brightness allowed me to see a man walking along the road, some 40 meters ahead of me. Must be a hunter, I told myself, and I moved the horse sideways to let him through, but with the intention of asking him about that disquieting light. As if to start a conversation, I asked, “Are you hunting, sir?” Not only did he not answer – he left the road to avoid me, moving into the marsh, on the road’s shoulder.

“I saw all this from horseback, telling myself: “this fellow’s going to be up to his waist in mud” and was surprised to see him pass over it without sinking. Then I paid closer attention to him, although somewhat from behind. The man chubby, short and with a short neck. He was dressed in dark green, with his waistline divided as if by a belt. One of his arms was close to the body, as if carrying something. For that reason I though at first he was a hunter and was carrying a shotgun.

“On his head, he had something like a helmet or hat. It was square, with a square brim as well. It looked transparent or glassy, and it some sort of tips on its top. And that’s when I got scared, and I galloped toward the field’s entrance, which was some 250 kilometers ahead. As I rode, I saw that the light was suspended in the air over the road, beyond where I had to go in. At that moment I felt a deafening sound, like 50 swarms of bees, and I saw about six or seven blue lights, flying along and leaving a short luminous wake behind them. They came from the south, over and behind the woods, and headed toward the light in the road. When they came together, they sort of blended, but the first light remained. I kept galloping, looking for the cattle gate, but the light blinded me. It was always ahead of me, some 100 meters away, but I could never reach it. Every so often I would close my eyes and lower my head, because it hurt my eyes.

“Suddenly I came to a curve in the road and found a carob tree, and I stopped in amazement. I was nearly at the end of the road! I can’t explain how I could’ve gone more than 3 kilometers from the entrance to the field. Then I made the turn and kept galloping. I thought the light would go away, following its own trajectory, but when I looked sideways, I saw it was following me some 70 meters behind me. I’m not going to exhaust the horse, I said to myself. If it wants to catch up to me, let it catch me!

“So that’s how it went. Every so often, I would look at it sideways, until I came to the spot where it had met with the other lights, and it vanished. Never saw it again. When I came to the entrance, the horse went all by himself. I was worried by my family, because the lights that went with the other came from the direction of my home. Upon arriving, I asked my wife if everything was well, and she said yes. And well, it was only a few days ago that I told her what had happened to me. I didn’t tell anyone until much later, and I told the bosses.”

This case could be divided into two classifications. On the one hand, it’s an encounter with nocturnal lights (obviously strange ones), as the shining light was maneuvering the air at one point less than 150 meters from the witness. The other would make it a nocturnal close encounter of the 3rd kind, unassociated (E.N. 3./N., in Spanish)

What makes it a CE-3 is the fact that the witness saw an alleged UFO occupant, given its characteristics and behavior. Basically, that is to say, walking without sinking into the mire (a particular characteristic recorded in other CE-3s) and “unassociated” because the vehicle was not seen in the vicinity. A further detail also splits the case into these two classifications: the completely different direction followed by the alleged occupant with regard to the position of the shining light, and other situations.

In analyzing this case, both the behavior and characteristics of the lights seen by the witness, make it very similar to those presented by what I call “probes”. The following hypothesis emerges with regard to these: What Mr. Coronel saw at first was possibly one of them: a small blue light emerging from the pond, rising to become intensely luminous, to then move horizontally toward the road. This behavior would not be casual; rather it would be part of a preventive or monitoring action upon detecting the witness’s presence, who heading in the direction that the alleged entity was coming from. The safety measures taken by UFO occupants are well known, when it comes to their safety, the safety of their craft, and assuring the highest degree of secrecy in their tasks. The technological devices they employ to achieve this are often incredible.

This leads one to believe that the maneuver was transmitted and directed from the probe’s carrier, presumably operating in the place it emerged from. The carrier craft, unseen by the witness, would have been somewhere in the area, supposedly in the direction the being was heading for, totally opposite that of the light. Other probes operating in the area subsequently met up with the first one. Based on experience, up to nine lights or probes have been seen to emerge from these intermediate craft, it is likely that this situation is somewhat similar. The witness states that the lights “joined up with the one casting the light” when in fact this light did not change, and remained the same throughout the event. It can then be assumed that they “didn’t merge”, but dimmed their light, remaining concealed and expectant while the object casting the light exercised “a certain influence” upon the witness. It must be noted that he acknowledged feeling “disoriented”

Finally, in corroborating the behavior and actions of these alleged probes, the fact is that “the light” did not continue along its route; rather, it turned around to follow the witness on his return trip. When Mr. Coronel finally reached the cattle gate, taking the road home, the light turned itself off, bringing its actions to an end, perhaps because the human no longer represented any danger or interference in the affairs of the strange visitors.

Moreover, it can be supposed that the horse was not “affected” for the simple reason that it was necessary means for getting the intruder away from the scene.

(Special thanks to Carlos Iurchuk of “El Dragón Invisible – www.dragoninvisible.com.ar — and Guillermo Gimenez of Planeta UFO)