UFODigest.com » Aliens and UFOs » CATTLE MUTILATIONS ASSOCIATED WITH A UFO SIGHTING IN ARGENTINA

This case contains nearly-ideal conditions for investigation, but for the inability to gain access to the expert report performed on site.

We would like to highlight, nonetheless, the valuable fact that this is one of the few cases in which the appearance of a light in the same time frame and geographic location can be associated with an animal mutilation.

Martin Bertochi and Vicky Ziegler are the researchers who came across the case, based on the testimony of Maria Antonia, who often waited for the bus that took her from Concordia to Calabacillas, a locality in the District of Yeruá some 5 km from National Highway 14 and 6 km from the Uruguay River. Chance would have it that she would meet Martin’s father, who having learned of light sightings in the area from another woman, informed Maria Antonia of his son’s interest in [mutilations] research, and this is how the case came together.

María Antonia broke into a run the moment her bus dropped her off after seeing the lights. She ran home, causing her to trip and be injured.

When Martin and Vicki learned of the case, they paid a visit to the witness at home, learning that this was not the first time that these “lights” appeared in the area. The owner of a farm facing Maria Antonia’s house had come across a mutilated animal and was illuminated by a powerful beam of light at the moment he made the discovery.

The family made up of “Cacho” and his wife, when interviewed by the whole team, seemed anxious to retell their encounter with the lights, with a mixture of excitement, stressing the truth of their experience.
[The researchers] received a warm welcome, as is the custom of country people. Kind smiles and firm handshakes defined, in a way, the hosts’ jubilant mood. They asked to come over to a sort of covered patio to get comfortable, and it was not before long that the first experience, only a few months old, was brought up (the exact date was not recalled).

…”They recall that it could have perhaps been during February of this year (2014). As was their daily custom, they were in their courtyard at night and a powerful beam of light turned the darkness to daytime. They realized that two lights were responsible for the luminosity.
They immediately phoned the police (noting that the authorities were hesitant to come over to the house). At first, Don Cutro thought that cattle rustlers bent on stealing his animals were to blame. Cacho is a man accustomed to walking around the countryside in the dark, as this is part of his daily routine. As he approached the tracks, where he saw the lights vanish, his wife called her aunt over so that she too could be a witness. 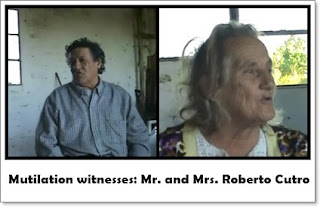 “They phoned their son in Concordia and apprised him of the events. Despite the fact that he is skeptical about such things, the son came over to his parents’ property to glean more information about the event. Weeks later, and aware of the places where the lights had been seen by the parents the night before, the son pointed in a given direction, asking if that was the site, to which the father said yes. At that time, both lights reappeared, seemingly approaching them through the countryside before vanishing. Later on, he managed to see a light that he went out to chase with a camera in his hand, jumping over a cattle gate. The light vanished without being captured on film.

We cannot begin to convey the case without first stating that the witness was interviewed with difficulty given over-exposure of the story by his own wife. We decided to re-interview him, returning time and again, about details of the event in order to obtain the story from his own experience. This is what you will find recorded in the narrative of the case, the product of several interviews. You will noticed these details in the audio that forms part of this research as well as the videotape.

“I was on horseback and was able to see a bright light wandering the fields while I conducted my survey activities. When I reached one of the corner points of the perimeter, I found an animal spread out on the ground. It was a cow.

“I approached the animal and when I did so, a source from above bathed me completely in its light. I had money in my pocket, so my first thought was that someone wanted to rob me. So I took off running, not knowing how – to this day – I crossed the wilderness and the cattle gates all the way to my home.

“The light was somewhat blue. It was lovely. When I got off the horse, I realized that my horse had seen the approaching light. It pulled the reins away from me, and that’s when I slapped it. It was then that the light covered me completely. When it did, I jumped back on the horse. I took off and don’t know how I made it through all the gates.”

“When he came home, he told me: “Do you want to hear something?” I replied, “If it’s nice, yes, otherwise say nothing at all.” I could see he was very frightened. He went through a forest of eucalyptus trees and doesn’t know how he made it.”

“It was dead. I saw it alive the morning of that day. Its earlobe had been mutilated and burned. They pulled out all its genitals. Well removed, without a drop of blood. They also pulled out its eye, like someone grabbing it and pulling everything out, as if burning while they did it. That’s how the animal was found.
“The municipal vet showed up (from Concordia) and it was Dr. Olivera at the time. The first thing he did was cut off its head. It had no injuries to its muzzle. Its tongue was missing – they also took it. I don’t know how they did it, that was a strange thing.
“I found the animal dead around 20:00 hours. It was alive in the morning.
“They brought 14 dogs over, but none would approach [the cow]. They wouldn’t eat it, either. A grass analysis was performed. Dr. Olivera came with all of the people of the Concordia Police Department.”

“The light looked as if the sun had come and shed its light. What I saw most was that it was a lovely light. Beautiful light. It was bluish, a light you see seldom. There was a eucalyptus plant nearby. They wanted to take me to the doctor, but I refused. What for? I asked. Then I went to bed. He looked at my leg, which was injured and my (right) leg was completely muddied. This is the first time we’ve seen mutilated animals. We didn’t hear about our neighbors having any. There were no marks on the ground.”

Wife: “One had the impression that it was hoisted and brought down, because the animal didn’t even kick.”

On several occasions now, the horse has turned up with marks, as though blood was being drawn from it. Little spots turn up. They’re oily. That horse has turned up two or three times with oil all over its back. It’s the same color as the horse, but darker.
Cows would run off to their pens. The animals couldn’t stand seeing a single light. You had to see the sense of desperation with which they took off running.
A week after finding the carcass, it was still possible to move the cow’s joints as if recently dead. The carcass disappeared completely 3 months later. Animals have died here, and their bones are still visible 4 to 5 years later. This one vanished completely.”

This then, is the statement by the witnesses regarding the events.

A separate factor involves the groups whose presence were made known in the case. It is striking. One of them in particular is a team of scientists that travels the entire country, investigating these cases, armed with major equipment. You should also know that the case you have just read never appeared in the national press and had no greater relevance beyond the local environment through radio station LT15 of Concordia. It is interesting to know that we are not the only ones looking into these cases: it seems that higher echelons are also concerned. Let’s see what we find the next time around.