Note: This is the original text submitted to Brazil’s UFO magazine, edited by A.J. Gevaerd. The article appeared in Issue 177, May 2011.

The man with the thick beard drank his coffee slowly. Later he turned to look at me, saying deliberately: “Around April or May, the cook remarked casually that around 17:00 hours he saw a plane flying in absolute silence – at least he didn’t hear any sound whatsoever, being in the kitchen and all – approached the center of the bay, made an abrupt turn, and pulled away.”

It was on a cold afternoon, seated in a bar in the city of Buenos Aires, that I heard this story from the lips of Jose Raul Bortolamedi, who had been stationed at the Almirante Brown Argentinean Base in the Antarctic in 1981.

Raul continued his story in an almost solemn tone of voice, ignoring the hubbub surrounding us: “Its altitude was estimated as being relatively low, between 100 and 300 meters, and it turned approximately 45 degrees. The cook was startled by the silence and abruptness with which the maneuver was executed. There was no news about any expected flights, since arrivals of commercial or scientific flights, or those of any other nature, were generally announced.”

But that wasn’t the only unknown presence during his stay at the base. After drinking his coffee, he continued: “In the summer, while the necessary arrangements were being made for the departure of chemists and biologists at the base’s dock, the presence of an object similar to a bean, executing a falling leaf maneuver, was noticed directly over the base. The time it remained visible is hard to estimate, but it was between 2 to 5 minutes.”

It is also the last continent on our planet to be explored and populated by humans. It is hard to determine who was its official discoverer. Some say it was Spanish explorer Gabriel de Castilla, who reached 64 degrees South and saw land in those latitudes (which could have been any of the South Shetland Islands) according to the testimony of a Dutch mariner who sailed with him. Other historians give the nod to Dirk Gerritz, also Dutch, as possibly the first one to see the surface of the Antarctic as he sailed south to the Mar de Hoces (or the Drake Passage) in the vicinity of the South Shetland Islands in 1599.

Apparently, it is easier to establish who was the first to reach the South Pole. Two expeditions set out toward that goal in 1911: one of them was the Norwegian expedition under the command of Roald Amundsen; the other was Britsh, and led by Captain Robert Falcon Scott.

Amundsen employed Greenlandic sled dogs as his motor power. Scott, on the other hand, employed ponies during the first stage and then human power during the second. Roald Amundsen reached the South Pole on 14 December 1911; Scott arrived between 17-18 January 1913. While the Norwegian crew faced no further complications, poor planning and misfortune caused the five British explorers to perish during the return trip.

Currently, most of the signatories to the Antarctic Treaty maintain scientific research stations on Antarctica. Some of them operate year-round, while others are of a seasonal nature and only operate during the summer.

The Orkney Base, or Destacamento Naval Orcadas, located on Laurie Island in the South Orkneys, is the oldest Antarctic base in service and belongs to the Argentinean Republic, which operates it year-round through the Argentinean Navy. The weather station was originally set up by William Speirs Bruce, a Scotsman, in 1903, who later sold the facilities, instrument warehouse and measuring devices to the Argentinean government. President Julio Argentino Roca, through Decree No. 3073 of 2 January 1904, accepted the offer, authorizing the Oficina Meteorlógica Argentina to maintain the station. 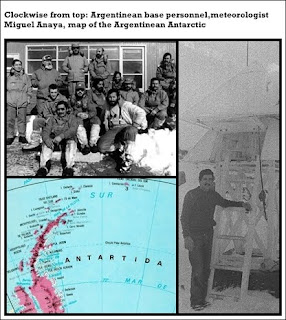 A Continent of a Thousand and One Stories

As has occurred everywhere else on the planet, UFO stories emerged from the moment on which man first set foot on the Antarctic. This inhospitable land, however, has another type of story that has achieved great popularity among those who study strange phenomena. One of them suggests that at the heart of the continent, at the South Pole itself, there is an entrance to the so-called “Hollow Earth”.

This theory basically asserts, as its name suggests, that the center of the Earth is hollow, with a sort of internal Sun, and inhabited by a highly developed civilization. There would be two immense openings, several hundred kilometers in diameter, on the surface of the Earth to provide access to this place, and these openings would be at the poles. This civilization would avail itself of the openings to come to the surface, and its craft would be the UFOs that we currently witness.

While this theory has been readily accepted by many, it contradicts the teachings of current science. And as the reader may well imagine, none of the expeditions sent to the South Pole found any openings whatsoever.

One of the few bits of “evidence” shown in favor of the presence of a large opening in the Antarctic was the photo taken by the U.S. Essa-7 satellite on 23 November 1968, showing a hole measuring nearly 1000 kilometers in diameter. What really happened is that the satellite “compiled” global images by means of smaller images that later made up a mosaic, incorrectly interpreted as an “opening”. The circular black space is nothing more than the “blind” spot that the satellite is unable to see during its numerous passes.

As a curious side note, Jules Verne, the great author who predicted may technological breakthroughs and historic events such as a trip to the Moon, was also correct in stating that humans would never reach the center of the planet. The title of his book Journey to the Center of the Earth is a small trap aimed at ensnaring the readers’ curiosity, since the journey in question was only a hazardous tour “within the Earth’s crust” and the novel’s protagonists never reached the center of the Earth.

While this is not the main purpose of the Article, one cannot speak of the Antarctic and its legends without a brief mention of Nazis. Everyone is aware of the significant technical achievements of Nazi Germany. The V-1 and V-2 flying bombs, for instance, served as the foundation for developing rockets by the U.S. which later enabled man to reach the Moon. German contributions to aeronautics were equally significant, including the development of jet-propelled fighters and the creation of so-called “Flying Wings”.

In spite of this, some are willing to take matters a step further and state that the Nazis were able to develop true UFOs, going as far as to say that they created major bases in Antarctica to conceal all of this technology from the prying eyes of the Allies. In the final months of the war, when the collapse of the Third Reich was inevitable, many Nazis fled to these bases in submarines. Not only did they find shelter there – they pursued the development of these vessels. As one can imagine, according to this theory, all UFOs seen since that time not only in Antarctica but worldwide, are German in origin.

And in order to make the theory complete, any scientific expedition sent to Antarctica, mainly by the United States, is nothing more than a smokescreen to conceal its true intentions: a military expedition to find the Nazi bases and seize their technology.

Setting these stories aside, let us return to the UFO sightings.

Official Acknowledgement by the Argentinean Navy

The most significant incident involving an unidentified flying object, mainly due to its consequences, occurred on 3 July 1965 at the Argentinean Naval Base on Decepción Island. According to the story told by Lt. Cmdr. Daniel Perissé, who was in charge of the base, they saw an object moving silently. “While it seemed solid, there was a certain lack of precision to its shape, sometimes lenticular and at others circular. Its visual aspect, of course, could have been affected by an atmospheric refraction phenomenon that could have resulted in an apparent deformation of its characteristics.”

What is most notable is that the Argentinean Navy acknowledged this event in two communiqués that were issued subsequently. The total absence of sound and variations in speed are highlighted, along with the fact that “it remained suspended for one minute.” While sightings of this flying object occurred at night, the meteorological conditions for the area, according to the initial communiqué could be “considered exceptional for the time of year.”

It should also be noted that it was seen at the Destacamento Naval Argentino Orcadas, located on South Orkney, and “at the moment in which the object passed over that point. Two variometers (magnetic field readers) in service at the time recorded disturbances to the magnetic field, captured on the tapes of both devices,” according to the second Argentinean naval communiqué.

I would not like to miss the opportunity to pay tribute to Daniel Perissé, who retired with the rank of Commander, and who sadly passed away in 2008. After the incident, and for the rest of his life, he participated actively in UFO research, cooperating with all ufologists who had the pleasure of knowing him.

It is clear that the UFO phenomenon is global in reach. By this I mean that there isn’t a corner of the planet where the presence of these distinctive craft hasn’t been reported. Therefore, it can be expected that such sightings would also exist in Antarctica. No sightings whatsoever would be truly strange.

Antarctica is the least explored continent, meaning that there are many things to be discovered in this corner of the planet. Perhaps not entrances to the center of the Earth, or hidden installations decorated with swastikas. But they will nonetheless be discoveries that will surprise us all, to a greater or lesser degree. And why not. Perhaps Antarctica is one of those places where UFOs go to conceal themselves (where are the UFOs when they are nowhere to be seen. Beyond their origin, its true that the scarce presence of human beings in the white continent makes it an ideal place to go unnoticed. But not forever…