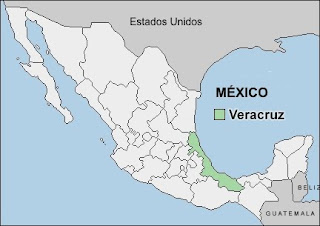 The NOTIVER newspaper reported on the incidents that took place at a ranch in the community of Las Compras, two kilometers distant from the municipal seat, according to Oscar Leonel Rojas, first police commissioner:

The sheep were kept in a pen within the ranch owned by Justino Andrés Bretón, and died when blood was sucked out of their bodies.

Bretón reported that he made the discovery on Tuesday morning. He found the seventeen lifeless sheep scattered throughout the ranch as he was about to feed them.

“We heard nothing in the early morning hours. There was no noise or anything like it. The animals presented bite marks in various parts of their bodies, mainly the neck. Some of them had tears in their skin,” he explained. His neighbors say its the Chupacabras, because the attack on the sheep shares the same characteristics that were in evidence during the animal slayings years ago throughout the municipality and the region.

Alarmed by the bizarre occurrence, local residents declared themselves in a state of alert, as they did not know the type of animal or beast that they are dealing with, and have therefore organized themselves into brigades to look after their animals. “What is odd is that there are no traces suggesting that the animal went as far as where the sheep were kept. Residents have made their fear of the alleged Chupacabras’s presence well known and have taken measures to prevent further attacks,” he remarked.