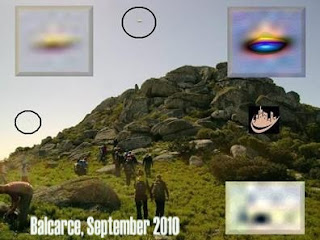 The photo was taken during the month of August.

An unknown element was detected in photos taken from the “El Centinela” mountain. These images were subjected to analysis by Fundación Argentina de Ovnilogía (FAO), concluding that it indeed showed an unidentified flying object (UFO). The event repeated itself in the city of Balcarce in recent days.

“Seeing is believing”, goes the old saw, applicable on this occasion in which the Fundación Argentina de Ovnilogía confirmed through a report sent to La Voz de Tandil that the object seen in the photo is “definitely a UFO”

The snapshot, taken by a private person in August 2010 from “El Centinela”, was analyzed by the Fundación, presided by renowned researcher Luis Burgos, stating that Tandil “was an area prone to sightings” of strange elements in the sky. “Whether it was made on earth or in other worlds, it is definitely a UFO,” concludes the document.

Burgos’ blog further reports sightings of unidentified objects over Balcarce having similar characteristics to the ones detected from the images taken in Tandil.