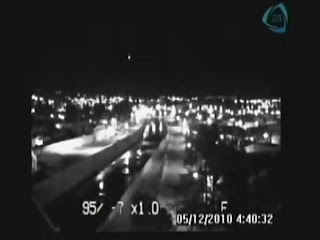 On December 5, 2010, Mr. Ezequiel Zeferino Hernández recorded a strange object over the city of Tulancingo. The witness is a C4 security camera operator.

At the end of his work shift, Mr. Hernández went out to the street and was able to see a luminous shape in the night sky. He returned to his office and used the building’s security cameras to focus in on the object, noticing that it changed shape as hours went by.

The “Bisemanario Ruta” newspaper published the events, and its editor — Lic. Juan Antonio Ortiz — sent me a full video (over 2 hours long) and put me in contact with the original witness. I originally learned of the case from my friend and collaborator Ing. Héctor Pérez.

It should also be noted that — according to Mr. Hernández — the UFO was located in the same area where a fireball was recorded last year.