Sobremesa” TV broadcast (Channel 28, Mexico City) during its most recent transmission. The first video was taken by Mr. Eusebio Tarango in Ciudad Juarez, a veteran sky watcher with twenty years’ experience, showing a glowing object in a blue, cloudless sky that apparently responded to Tarango’s commands to blink at him, then to blink even brighter, and finally to “come down and heal him.” The object complied with the first two commands, and appeared to launch a small orb as a response to the third request. The lesser orb rose straight into the air before vanishing altogether. This video was recorded on approximately October 17, 2010. 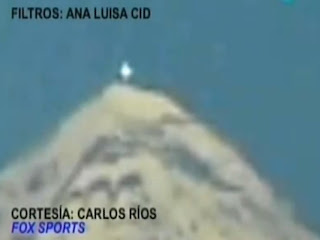 The second video is as unusual as the first. It was provided by Carlos Rios, a trainer with a prominent Mexican soccer team, and shows an unusual physical object moving over the snow-crowned summit of Mt. Popocatepetl (17,000 feet) and reflecting the sun’s rays as it moved. While a FOX Sports crew was interviewing soccer player Luis Menes, the athlete himself pointed out the fact that something unusual was taking place over the volcano. The FOX cameraman turned and pointed his camera at the summit, capturing a clearly metallic structure tumbling in the air. This video was recorded on January 20, 2010 at 3:30 p.m.

INEXPLICATA thanks Prof. Cid and “La Sobremesa” for the information.

The full video can be seen at https://www.ufodigest.com/video/uncanny-mexico-ufo-video