Interstellar space-travel and near-instant communication; discovering a network of intelligent extraterrestrial signals; harnessing the mysterious instantaneous quantum-entanglement effect. These are all either science fiction or things we will probably never live to see or understand, correct? Not at all. By the end of this article you will see how clarifying a simple but extremely fundamental misunderstanding in our science legacy makes all of this a viable reality – now.

All Just a Misunderstanding

How can this be? It’s not as surprising as it may seem, but follows from the leap of understanding that often occurs when simple misconceptions are clarified – it is just that this particular misconception reaches back centuries to the very nature of matter and energy. Misunderstanding the nature of light, for example, the physics underlying “quantum mechanics” and the meaning of experimental results can easily produce a strangely complex science and an oddly bizarre and paradoxical universe. But is this a true reflection of the world around us, or is something else going on here?

In actuality, much of today’s science emerged in much simpler times centuries ago, now forming a legacy of often unquestioned and presumed truths about our world. But on closer examination many of these presumed truths are actually just abstract models and not physical answers at all. This misconception is powerfully reinforced in our educational systems and science programs, locking us into an often-troubled science paradigm of abstractions, contradictions, mysteries and paradoxes.

Newton, for example, only created a mathematical model of his proposed gravitational force, offering no scientific or physical explanation for its still-unknown source of power, its law-violating undiminishing pull across eons of time, or how and why it even attracts matter together at all. Einstein offered a radically different, even more abstract and mathematical model for gravity two centuries later, providing even fewer practical answers, resulting in both models now residing in our science.

But can the singular physical nature of gravity truly be captured by two different theories? Can light from a distant source be simultaneously both a “wave of pure energy” and a “quantum-mechanical photon particle”, only physically “choosing” one or the other based on how it is later observed? Can a magnet cling energetically to a fridge against the constant pull of gravity, yet need no explanation for this endless energy?

Clearing it All Up

So, what is the centuries-old misunderstanding in our science? As mentioned earlier, it turns out to be a simple misunderstanding of the nature of matter and energy. Today we think of matter as passive lumps of mass, with various ethereal energy phenomena actively driving everything. But what if, instead, it is matter itself that is active – both atomic and subatomic matter – and there are no separate “energy” phenomena at all?

The simplest example of this is a rethink of gravity, where all atoms actively expand very slowly and in unison. Nothing would appear any different over time, but standing on an enormous expanding planet means we would certainly feel this expansion beneath us – as a force pushing upward under our feet. Also, held objects would feel heavy as we essentially carried them along with us while being pushed upward, and would appear to be pulled to the ground when released, actually allowing the expanding planet to strike them instead. All objects would have to “fall” at the same rate, regardless of mass, which is precisely what does occur. Tossed objects would similarly appear pulled to the ground in curving paths that extend further the faster they are tossed, eventually never reaching the ground at all, but continuing around the planet in a continual orbit if tossed fast enough.

Today’s science explains quantum entanglement as an experimental observation where two photons from the same light source travel together, then are sent on two separate paths yet apparently maintain a mysterious link with each other. Thus, if one is later altered (such as a change in polarization), the other is instantaneously altered in the same fashion no matter how far apart they may be. This is considered a mysterious faster-than-light communication between two “entangled photons”.

However, with the new understanding, the nature of light is radically changed from separate photons fired through space, to continuous beams of expanding subatomic-matter clusters that our eyes detect to generate the experience of color and brightness. In this case, this is not an experiment with two photons exhibiting mysterious “quantum entanglement”, but merely two separate unseen continuous beams of expanding matter clusters physically connected back to where they were split from one initial beam. Then the more likely explanation of the “entanglement” effect is that an influence altering one beam is conducted along this continuous span of unseen physically connected matter clusters to affect the other.

And, since vibrations in solid objects travel faster the denser the material, the speed of conduction through the extremely dense span of such subatomic-matter clusters in light may well be extremely rapid – even far exceeding the speed of light. The “entanglement” experiments appear to suggest this possibility of conducting signals along beams of light at speeds that so far appear to be instantaneous, providing a practical possibility for faster-than-light communication. 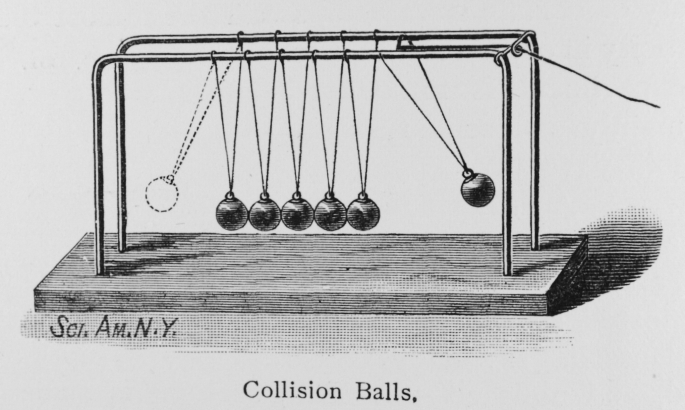 Crucially, advanced species would likely use such communication along existing beams of starlight rather than generating light or radio waves and waiting for them to physically cross space at the relatively slow speed of light. An analogy for the difference between these two signal-transmission methods can be seen in the desktop toy with a line of hanging metal spheres suspended next to one another, often called Newton’s Cradle. When one sphere is pulled back then released to swing and strike the others, a sphere at the far end is immediately ejected. A long line of such spheres would allow transmission of such a signal to the far end in this manner far faster than it would take for a single sphere to swing that same distance on its own.

Likewise, the new understanding suggests we might develop ways to look for such rapidly conducted signals hidden within existing starlight that already connects us with the distant stars, rather than today’s method of looking for conventional light-speed signals as embedded features that move along with the beam. There could well be a hidden interstellar Newton’s Cradle-style internet all around us, awaiting any civilization that reaches this fundamental understanding of matter and energy. We could also find a way to conduct such a signal within the light of our own sun, revolutionizing telecommunications in the process.

Much More to Come

This new understanding rethinks everything, showing that even space travel is no longer limited by Einstein’s claimed “speed of light limit”. Such apparent limits from particle accelerator evidence simply stem from our misunderstanding of the true nature and behavior of the accelerating “magnetic and electric field energy”. These “energy” fields are actually fields of expanding subatomic particles which, by nature, expand at the speed of light, hence particles in these accelerators could never possibly go faster when powered by such means. Also, apart from the practical propulsion challenges, the fact that our spacecraft have never come close to light-speed has nothing to do with such a speed limit in nature, but is more because we haven’t truly tried since we believe today’s light-speed myths. 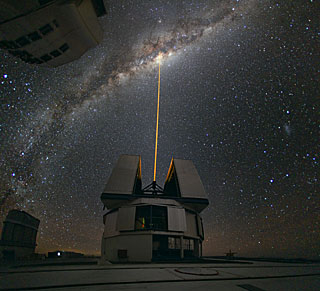 The power-source violations of the “law of conservation of energy” by gravity, magnetism, and many other observations also now vanish. “Quantum mechanics” is as a mere fanciful model for a much simpler physical manifestation of expanding subatomic matter, suggesting viable and simple new advances toward detecting entire networks of intelligent faster-than-light extraterrestrial communication conducted along existing starlight. Gone are the physical mysteries and confusion of “quantum entanglement” and “quantum paradoxes”, which, it turns out, never were true physical mysteries at all, but mere human misconceptions of a far simpler physical reality right under our noses. The need for communication satellites circling the globe may well now be a thing of the past, and real-time robotic “virtual reality” exploration of distant moons and planets could be a reality for us, controlled instantaneously from here on Earth.

Is such a revolution worth studying, considering how many billions we are spending today on telecommunication research, quantum computers, satellites, SETI and other technology? I think so.

For more information about this new revolution in science, read my previous article “Expansion Theory – Our Best Candidate for a Final Theory of Everything”: http://www.themarginal.com/theory_of_everything.html

Mark McCutcheon is author of “The Final Theory: Rethinking Our Scientific Legacy”. For more information and further reading on Expansion Theory, visit http://www.thefinaltheory.com

Please use horizontal scroll bar if you do not see entire images. 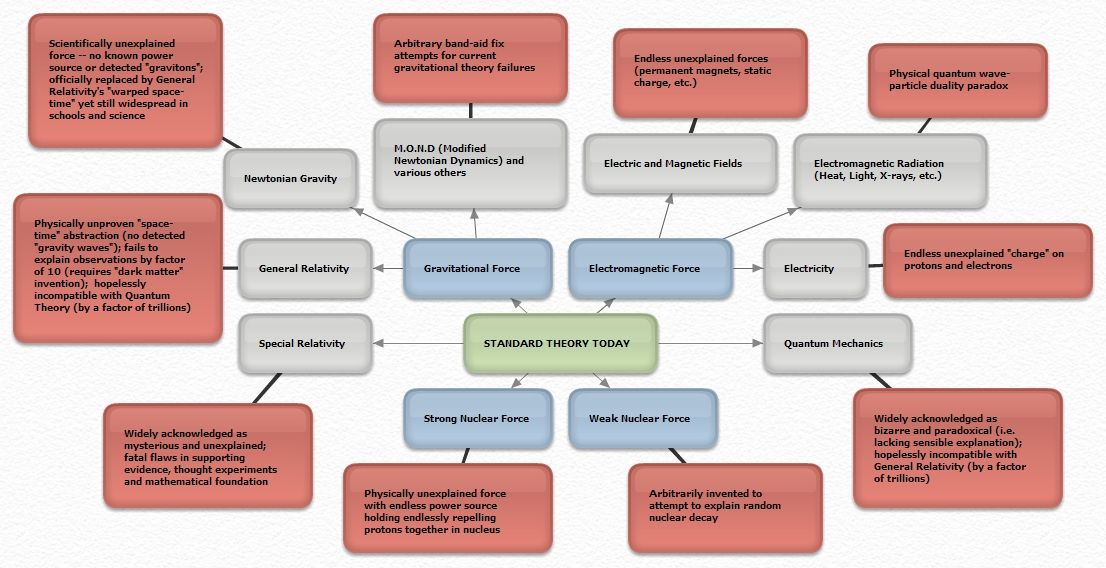 Turning Gravity Inside Out

Gravity as a Result of Expansion

Gravitational clustering as a result of particle expansion

All posts by Roland Michel Tremblay