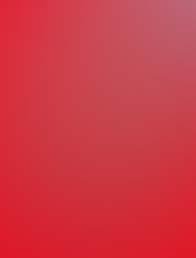 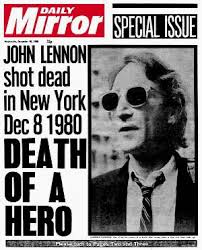 John Lennon Was Assassinated 35 Years Ago Today
By Mark R. Elsis
(Copyright 2015, Mark R. Elsis – All Rights Reserved)
<Edited by Robert D. Morningstar>
*******
Preface
“If the masses started to accept UFOs, it would profoundly affect their attitude towards life, politics, everything.  It would threaten the status quo. Whenever people come to realize that there are larger considerations than their own petty lives, they are ripe to make radical changes on a personal level, which would eventually lead to a political revolution in society as a whole.”
John Lennon
*******
John Lennon was the greatest singer songwriter and the most influential political artist of the 20th century.  Lennon was assassinated on Monday, December 8, 1980.  I am writing a new article that is filled with questions (to get people to think) about his assassination.  When finished, it will be published on: ->  December81980.com & here on UFO Digest.
Please note that I will be a guest on Spingola Speaks with Deanna Spingola this Friday evening, December 11, 2015, from 7 pm till 9 pm (est).  I will be talking about December 7, 1941 (Pearl Harbor) and December 8, 1980 (The date of the assassination of John Lennon).
http://RepublicBroadcasting.org
I will also be a guest on The Opperman Report with Ed Opperman (pretaped Thursday) to be aired this Friday, December 11, 2015, from 8 pm till 10 pm (est).  I will be talking about December 8, 1980 (The assassination of John Lennon).
http://OppermanReport.Blogspot.com
“I am going into an unknown future, but I’m still all here, and still while there’s life, there’s hope.”
John Lennon, December 8, 1980
In mid November of 1980, I told all my close friends John Lennon was about to be assassinated.  I told them that the powers that be were going to blame a lone deranged crazy fan, and that this person would never have a trial.   I don’t know how I knew all of this.
*******
Editor’s note: -> As Thomas Campbell stated in the 1781,  “Coming events cast their shadows before them.”
This terrible event, yet another act of global terrorism based around assassination of another kind of “world leader”  (like those of JFK, MLK, RFK and the atempt on Ronald Reagons life just 4 mohnths later) was also forshadowed in Woody Allen’s film “Stardust Memories” wherein the “hero” (Woody Allen) is killed by a loving fan right after having an encounter with extraterrestrials in a forest.  The ETs tell Woody: “We love your films … especially the earlier funny ones.”
It is not uncommon for intelligence agencies to prepare the public for such public executions with “public premonitions” presented as entertainment.  Another case in point, was the preparation of the public psyche for the JFK Assassination by promoting the book and movie called “The Manchurian Candidate” the year that JFK was killed. <See editor’s postscript below>.
******* 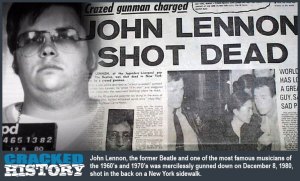 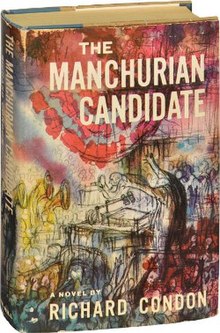 The Manchurian Candidate
& “Publicized Premonitions”
I was 15 years old when I saw ‘The Manchurian Candidate” for the first time in general release theaters during the spring and summer of 1963.  I saw the film twice that year, and at least a score more times since then.  I have now studied this film and another Frank Sinatra film (“Suddenly”) for more than half a century.
The 1962 film, “The Manchurian Candidate,” featured an all-star cast, headed by Frank Sinatra, Angela Landsbury, Henry De Silva, Janet Leigh, & James Gregory.  But playing the lead role and the part of a US Marine turned assassin via Communist mind control, a most unusual and, to American audiences, a lesser known actor, Laurence Harvey,  cast in the role of Sgt. Raymond Shaw (USMC),  a cold-blooded killer under control of a pro-Communist handler, in this case, his mother, played by Angela Landsbury, in her Academy Award-wnning role.
From the very first time that I saw the film, as great as it was, I experienced a sense of “cognitive dissonance”  while watching the film each and every time , and this consternation was caused by what I saw as a tragic flaw in the casting of an actor, whom at that time I thought of as pure “Englishman,” to play “Raymond Shaw,” a former American US Marine as the programmed killer and “lone assassin.”  Moreover, the actor never attempts to modify his perfect English accent to sound more “American.”  In fact, until a few years ago, I recall thinking each and every time that I saw the film:
“How odd! … Strange, Why, in heaven’s name, would director John Frankenheimer cast an Englishman in the role of a former American Marine to play the assassin?”
With thousands of very qualified American-born actors fitted for the role, the casting of Englishman Laurence Harvey in the title role made no sense to me at all.  That is, it made no sense to me at all until 1996 when, in the midst of my investigation of the assassination of JFK, as the saying goes:
“The scales were stripped from my eyes.”
In 1996, while deep into my investigation of the JFK affair, I decided to revisit the 4 best assassination films ever made.  These include the 2 Frank Sinatra films already mentioned above, as well as, “The Day of the Jackal,” which recounts the failed attempt made on the life of Charles DeGaulle in 1961-62, and “Behold a Pale Horse,” which starred Gregory Peck in the role of a Basque separatist.
It was during that period of investigation that I experienced a real shock to my senses and came to a deeper understanding of the extensive role played by the CIA’s MK-Ultra program,  before the JFK asssassination, in preparing the American and world public for the upcoming assassination of President Kennedy, and the acceptance of the “Lone Gunman Scenario” in the aftermath of his murder, a murder most foul.
The shock to my senses was quite profound and it came as I was viewing the titles and credits and I realized exactly why a Lithuanian-born “English actor” in the lead role.  Reader, take note that Lithuania was under Soviet rule in 1962, which would lend a strange  air of “Russian-ness-under-the-skin” to this very talented actor’s mystique.
Imagine my surprise and amazement when my mind’s eyes suddenly stripped away key letters from the credits as they appeared on the television screen, and I realized that embedded within the actor’s name and well-camouflaged within it was the name of President Kennedy’s future assassion, as shown below:
Laurence Harvey
Within which name another, a subliminally embedded name, can be read (but only when deciphered):
LaurEncE Harvey = LEE Harvey
LaurEncE Harvey
The Manchurian Candidate
https://en.wikipedia.org/wiki/Laurence_Harvey

L_E_E  Harvey, USMC
An American hero who died for his country
*******
<PostScript by Robert D. Morningstar>