Robert J. Kelder (publisher, Willehalm Institute) presenting an advanced
edition of  “9/11: THE ACCUSATION” to famed filmmaker, Michael Moore,
during BookExpo America (BEA) held at the Javitts Center in New York City
New York City, May 28, 2011
The advanced edition of the true crime and atomic counter-espionage book,  “9/11: The Accusation – Bringing the Guilty to Justice” by Slobodan Mitric was presented to, among others, Michael Moore at the BEA (BookExpo America) on May 25 in New York City.
The impromptu presentation by the publisher of the book, Robert J. Kelder, occurred during an autograph session by the filmmaker of “Fahrenheit 911” during the second day of the book fair that took place from May 24-27 in the Javitts Center in New York City.
The Willehalm Institute  Press Foundation from Amsterdam, The Netherlands was present at BEA  with Kelder and his assistant, Iwanjka Geerdink, in a Writer’s  Booth (Nr. 5048!) displaying four banners from 9/11- The Accusation, including one highlighting Mitric’s previous true crime story “Help! They’ve Kidnapped Me! Lady  Di”.
“9/11 – The Accusation” is currently only available in the US as an eBook  (PDF) on this blog and at WillehalmPress.org.   The paperback version will appear soon and can already be ordered by sending an email to

A limited number of copies for promotional purposes, reviews etc. are available. 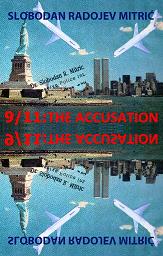 Willihalm Institute Special E-Book Offer
An advanced edition of a true crime book with revealing documents by Slobodan Mitric, Director of Reserve Police International is intended to help bring those persons to justice who despite Mitric’s forewarnings allowed 9/11 to happen.

The E-book version can be ordered by sending $6 (US) to PayPal account of the publisher, Robert Jan Kelder

Please indicate the email address where the Ebook should be sent.