Over the last year I have had a handful of reports being sent to me concerning the strange sightings of large rectangle shaped crafts being spotted.

I  only have a few of these reports and noted at once that they came from people who lived in isolated areas with limited population to witness these strange UFOs..

All of the reports were similar. The people all  lived in rural areas with small populations who witnessed these large crafts late at night.  The people all describe the craft as the size and shape of a multi- storied building . They say the craft is rectangle in shape and  glows fully in a white  light.

The sightings I have had reported all claim that these crafts float by over the tree line as low as 100 feet  to claims they were where about as high as a low flying plane would be. There was no sound heard in any of the sightings.

The people who witnessed the crafts all were confused and frightened by what they saw. The fact that the crafts were so large was what concerned the people . One man felt that  the craft  he   saw was large enough to carry hundreds of beings and he immediately left the area and headed towards the town near his home as he thought we were going to be invaded.

I find the reports on these large building like crafts extremely strange. I can suggest options  concerning  what  may be piloting these immense UFO’s however I realize we  truly have no idea who or what may be traveling over our planet in these crafts .

I do think they are used for a purpose that they  do not want us fully aware of and try to stay in areas with few people and lots of wilderness to avoid our seeing them.

A few years ago I wrote an article with my friend Ed Fleming concerning a terrifying experience a man in the Canadian wilderness had when he witnessed  one of these huge crafts in one of his fields . 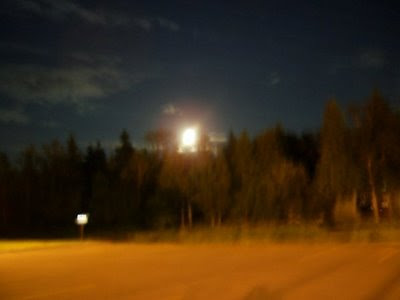 The man was on his usual inspection of his property one night when he came across a huge light mass hovering over the trees lining one of his fields. He told us it was a massive extremely bright light that lit up his entire field. Along the right side of the light stood what looked like a rectangle structure of some type that seemed to be hovering next to this huge light.

The man thought this was the strangest thing he had ever seen and luckily had his camera with him and took a picture of the lights and his field. The object was so strange looking the man became extremely fearful and immediately left the area after taking the photo.

This event has upset this man since the day it happened. He decided to send it to Ed Fleming  who then passed the information on to me.   The man wanted to know if we  could help him identify what this light and structure next to it could have been. Ed examined the photo with great care and noticed what appears to be a gray looking creature peeking from behind a tree looking towards the man while he stood next to his truck to take his photo. The man never noticed this creature at the time. 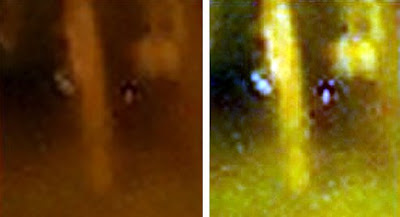 In the photo you can see what looks like there  someone or something hiding and watching the man from behind a tree. There also appears to br what looks like some kind of object in the hands of whatever is standing there.

The craft object seems to have some kind of base supporting it . The light source is unexplained.

We had  the photo  analyzed to the best of our  ability and could not find any obvious attempt the photo had been tampered with.  Not being an expert I can only offer what we were sent by this man of the sighting he witnessed. . 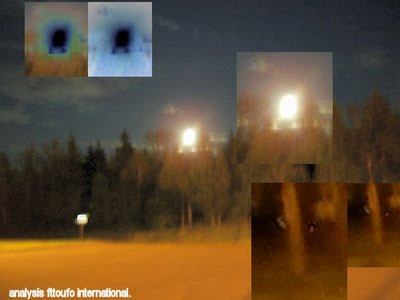 This ordeal has been extremely upsetting for this man and he would only release the photo to us with the promise we would not identify who he is or where his land is located.

We find this to be an interesting photo. This is not the first time I have had reports of strangeness in desolate locations concerning large crafts of strange bright lighting in other wise dark wooded areas.   I  wrote about  two men in Australia who had almost the same exact experience happen to them in a remote field in Australia while they were hunting. They too saw a similar light however they experienced lost time during the event.

I want to point out that this man in Canada did the correct thing by leaving this area at once. He was alone facing the unknown and knew his best course of action was to return to the safety of other human beings. This action was clearly the right choice as although at the time the man did not notice that there may have been something watching him behind the tree he did know the entire encounter was very strange and  he needed to leave.. I think it is clear that if he had ventured into the field the outcome of this story may be very different. Remember caution first when dealing with things that are unknown.

I am not sure of what people are seeing when they report these huge building type crafts. I have heard theories  that they are huge mother ships to those who think   they are holograms.   I do know that we have lots to learn about what is happening on our planet including what these huge ships may be.  ..

One day we will know. Until then be careful out there.