UFODigest.com » Aliens and UFOs » Rabbi, Name of the Messiah, UFOs and the WWIII

Rabbi, Name of the Messiah, UFOs and the WWIII
– Shortly before he died, one of Israel’s most prominent rabbis wrote the name of the Messiah on a small note which he requested would remain sealed until now. When the note was opened, it revealed what many have known for centuries: Yehoshua, or Yeshua (Jesus), is the Messiah. Full story:

– The Last Pope: The Saint Malachy Prophecy (Video) – St Malachy was the Archbishop of Armagh, to whom were attributed several miracles and a vision of the identity of the last 112 Popes. He was canonized by Pope Clement III as a Roman Catholic “saint”, on July 6, 1199, the first Irish saint to be canonized.

Biblically speaking, the papacy has no authority to “make” or canonize anyone to be a saint. There is no papal stamp of authority from Almighty God. Full story
http://www.disclose.tv/action/viewvideo/52788/The_Last_Pope__The_Saint_Malachy_Prophecy/

Foto: Wikipedia
– Jesus will return by 2050, say 40pc of Americans… UFO disclosure in Israel (VIDEO): Oldest footage released… FILM: UFOs in the Bible…How celestials assist humanity with extraterrestrial life… ABRAHAM… MOSES AND THE SPACESHIPS OF THE GODS… Secrets of the Vatican – UFO’s in the Ancient Art… THE STAR OF BETHLEHEM MYSTERY… Messiah – His Spaceships:
http://cristiannegureanu.blogspot.com/2010/06/jesus-will-return-by-2050-say-40pc-of.html 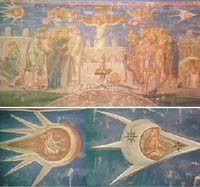 * The Unknown History of Mankind… Origin of the Species, From an Alien View:
http://cristiannegureanu.blogspot.com/2010/01/origin-of-species-from-alien-view.html