Star Wars – Russia ‘to work with Nato on missile defence shield’
Ronald Reagan – The Alien Thread
“In our obsession with antagonisms of the moment, we often forget how much unites all the members of humanity. Perhaps we need some outside, universal threat to make us recognize this common bond. I occasionally think how quickly our differences worldwide would vanish if we were facing an alien threat from outside this world”
Speech to the United Nations General Assembly, 42nd General Assembly
September 21, 1987
– Russia ‘to work with Nato on missile defence shield’ – Russia has agreed to co-operate on Nato’s programme to defend against ballistic missile attacks, Nato’s chief has said.
Anders Fogh Rasmussen said at a Nato summit in Lisbon that the two sides had agreed in writing that they no longer posed a threat to one another:
http://www.bbc.co.uk/news/world-europe-11803931 “I occasionally think how quickly our differences, worldwide, would vanish if we were facing an alien threat from outside this world” – From a speech with President Mikhail Gorbachev, in 1988
He made almost the same comment on many occasions… In 1988, President Ronald Reagan addressed the General Assembly of the United Nations. The speech has become known as his famous Disarmament speech.
In this address, he postulated upon his “fantasy” of an alien species, from outside this world, invading Earth. Reagan thought that this would unite all humanity and tear down national borders. He also said that an alien force is already amongst us. Hear the audio portion of this speech above:
http://www.bibliotecapleyades.net/exopolitica/exopolitics_reagan03.htm
– MIKHAIL GORBACHEV AND UFOs – Mikhail Gorbachev was the first and the last national leader who acknowledged the issue of unidentified flying objects in Russia:
http://cristiannegureanu.blogspot.com/2008/11/mikhail-gorbachev-and-ufos.html 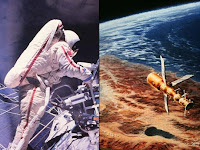 – UFOs and Obama Memorandum on Scientific Integrity… Hillary Clinton desire for UFO & extraterrestrial diplomacy… A Tale of Extraterrestrial Politics in the White House. Uncover the true history of the US President’s ( from Truman to Bush) involvement with UFOs and extraterrestrials in pictures and articles: