A  while ago I wrote an article about my adventure of investigating , with a bunch of my family members, the legendary Mt Misery Road here on Long Island , New York.
The road is known for  being haunted by way of  being a place with lots of old history including being the location of a civil war Hospital among other things.
For years people have been claiming to see ghosts along the road especially around the area of a very old cemetery
A handful of relatives and I  decided to take a trip along this road about a year or so ago and found it to be very interesting. The road is located in the middle of a very busy part of Long Island however stands out like a throbbing sore thumb as soon as you travel for a few minutes down the road and away from civilization.
The area of this road has been preserved by old homesteads that  have become locked in time. The road and those around it are narrow  country roads lined with lots of open land belonging to the old houses that make up the area. There is a great deal of state owned property mixed in along the road making it very desolate and blocked from what the rest of Long Island has grown to be.
Traveling down this road is like stepping back 200 years in history. Not only is it locked in a time warp it is also a very bleak eerie place that without question made my skin crawl. I did not enjoy my trip to this road or the area around it , in fact I could not wait to leave .
My family and I did not see anything we found ghostly during our first visit to Mt Misery Road and decided to track back to look at the old homestead of Walt Whitman in the area. When we reached the house we pulled over off the road to look in at the house and grounds.
This was when two odd things occurred.   While looking at the house we heard an old time train whistle coming from the large state own preserve across from the house. My brother was in the back seat and commented that  there were no train lines in the area. We all thought it was odd but knew there could have been many reasons for hearing it including  the fact someone in the area may own an old  train whistle and uses it to call in kids or to announce the time. People do this kind of thing when living in a open country area. 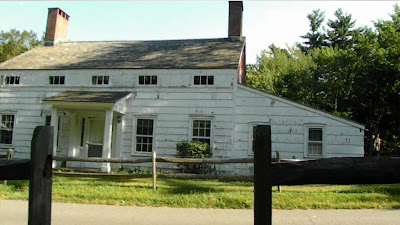 Photos taken that day with one below showing odd shape in second floor window that was not there seconds before. 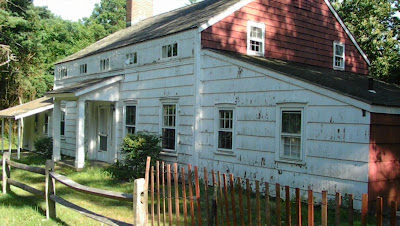 My brother wants to return to take careful photos to see if he can capture anything else. I told him he is on his own . All I can say is that things are very odd on Mt Misery Road and I guess that is why is has the reputation as the most haunted road on Long Island.
♥ Copyright © 2011 Chris Holly all Rights ReservedChris Holly’s Paranormal World- http://endlessjrny.blogspot.com/Email [email protected]  Phone:             631-887-4818