UFODigest.com » Science » Space » Mars » THEY ARE NOT HUMANS, SO STOP THINKING OF THEM THAT WAY!

When it comes to alien life forms that may co exist in this universe with human earthlings one major issue seems to be a huge disconnect for the humans. That disconnect is that humans seem determined to give other life forms , other alien species human qualities when the truth may be they are nothing like us in any shape form or way of thinking. Aliens may have completely different views of good and bad as well as what is right or wrong. Aliens may not live or reproduce in family groups or see anything wrong in eating things we find unthinkable just as we have no problems eating cows, pigs , chickens and fish. My point is we seem to insist in trying to give them qualities like compassion and wanting to be helpful towards us  when that may be the furthest thing from their minds.

Over the years I have tried to no avail to explain to my fellow humans that they may end up extremely shocked or disappointed in what they one day find out regarding alien life forms due to their own insistence that aliens have human qualities.

Mankind give aliens similar body shape and size to aliens. They think many aliens are able to walk around with ease in our environment and atmosphere.  In my thinking this may be a HUGE error in thinking that aliens may have human cultural attributes. I think we are wrong on most of our thinking and that thinking is what keeps us delusional and kept in the dark ages about the large varied  population of the cosmos.

The first thing to think about is that the amount of different life forms possible in this universe  may be as endless . I am sure from bug like bodies to reptile and fish forms alien life  exists having intelligence all through the cosmos.

There may be gas forms of life that take energy from other gas forming factors on planets we do not even realize exist out there or beings of pure energy that have no true body shape. There may be thinking life forms that are plant in form and absorb there energy needs as well as forms of life we are not capable of even imagining as we have nothing like it on our planet. 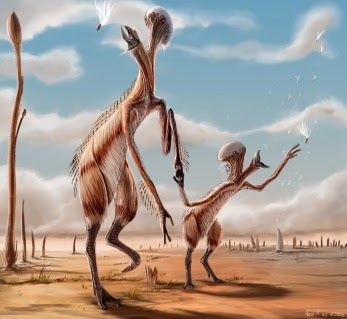 There very well maybe many aliens with like us in body shape and texture or makeup to humans meaning two arms two legs one head and large brains that does not mean that aliens have anything at all past that in common with humans on earth.

I have had countless conversations during my years connected with the paranormal unknowns where I have tried to explain to my fellow humans that it is a huge mistake to continue to think of aliens with human thinking.

I am sure that those who are able to conquer traveling space and time have about as much in common with us as we would to cavemen or the life forms that lived on our planet before the humans of today came in to existence. 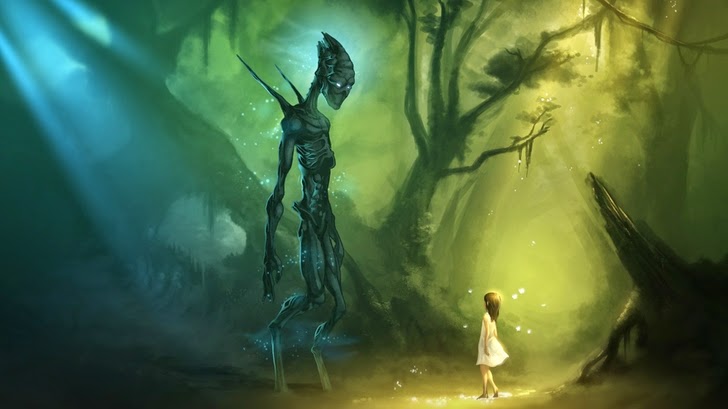 I often wonder why so many humans feel that aliens are going to be the answer to our problems be it war or health issues or saving our planet.  Aliens have been here most likely longer than we have yet I do not see where they have contributed to these things unless it would somehow interfere with their own agendas for being here. In the past I do think it possible alien life forms did visit and did teach us or build structures on our planet but honestly I think it was for their own use and comfort or control of the humans living here at the time. I believe it was for their benefit not ours.

Aliens may not understand compassion or pain in the way humans do and we may not understand what is important to them or why. Humans may be far better off  letting  go of and stop insisting aliens contain human qualities and stop waiting for them to react to us or what happens on this planet in human terms. Aliens are not humans  Stop waiting for them to act like us. look like us and think like us….. they are not human.

Before you spend another second of time trying to force alien beings in to possessing the qualities of a  human  think first about the differences in the life forms on our own planet. 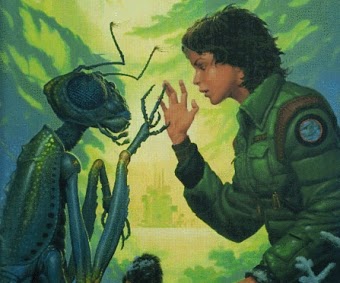 On earth in many western nations the divorce rate is 50 percent.  However in the animal kingdom on this planet we have many animals that mate for life like Gibbon apes, wolves,
coyotes, barn owls, beavers. bald eagles and swans to mention a few. Obviously we do not share this attribute with our fellow earth dwellers. Mating or even family or reproduction may not be anything like we have ever known  yet we like to imagine aliens with babies and caring families.

The praying mantis, black widow spider, and jumping spider are among a number of species that devour their mates. Sexual cannibalism is also found in other invertebrates, including a relative of the praying mantis, the Chinese mantis, and scorpions. Cannibalism has also been noted among South American green anacondas — the largest snakes in the world.”

Plants do not eat they Photosynthesis-which is the process by which plants convert energy from the sun.  I am sure it is possible that intelligent forms of life may have developed in some way like plants taking energy from the environment and do not eat or reproduce as animal life forms do. We need to  think about the  endless possibilities and should stop thinking along the lines that aliens are like us in any shape or form.

Look at jellyfish, along with all known Coelenterates]that have two nerve nets of “wires” which simply inform muscles to contract when the animal is upside down, just like our inner ears. They would tell the animal where the surface is by either gravity or light detection. . Nerve centers in some animal groups control area of their bodies, like the segments of an earthworm.  Earthworms actually have two large nerve centers or brains which help (1) the gut to maintain its digestive sequence and (2) the senses from the skin to coordinate the animals external musculature and movement.  . Who are we to say that in another space and place that form of life continued to become intelligent and productive life forms by evolving down a different path keeping many basic body structures as well as adding others to find intelligence in another way we do not understand.

All of these things make me wonder why we spend so much time discussing and waiting for the strange unknown alternate life forms we see visiting this planet to be like us and not more like an emotionless robot or giant ant that have long ago developed the intelligence to technically travel space however may have also held on to their own culture and ways of life . To think that aliens  think , live or believe or can feel as we do is a huge assumption.  The problem when we assume things  is that it often ends up making an ass of you and me! 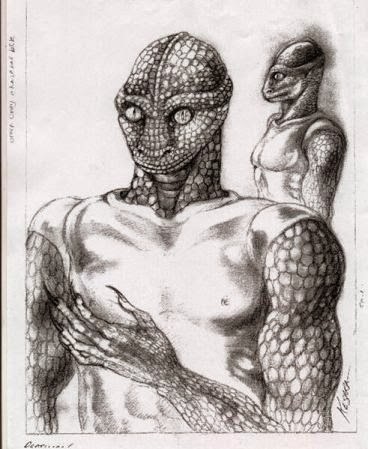 Do not waste your time thinking aliens are here for your benefit or to end all our problems. If that were the case they would have done so long ago. I am sure there are aliens who mean us no harm or who would step in if we needed help however I also know there are many different forms of alternate life forms visiting our planet and with them come many different reasons for being here.

You may have species that understand love and compassion along with family and emotions as well as those who have no idea or understanding of any of those things and react as a insect or reptile would to situations. Bugs work often in lock step in large groups that protect feed and keep their colonies together. They do not care if they are devouring your skin or bite you until you are nearly dead as it is what they do if they come across what they need near their habitats. A life form that developed from that type of species may approach other life forms in the same manner and not think anything of it,

A reptile shows little or no heart as far I can see. If it is hungry it grabs whatever is near and swallows it whole. If it needs to reproduce it grabs what is ever near and takes care of that as well.  I do not think a loving kind human way of thinking could easily develop from that kind of nature.  All of these things have to be taken in to consideration

However with all of that said that is not what you hear  when humans talk about aliens or why they are here. I hear reasoning that is human in context . People try to give them our qualities our reasons our wants our needs and our desires and even fears. You can not do this as one more time I will tell you ALIENS ARE NOT HUMANS STOP THINKING OF THEM THAT WAY!

I do believe that the balance of good and bad light and dark may carry along with all things in this universe as well as every level of these things that exist between the two. 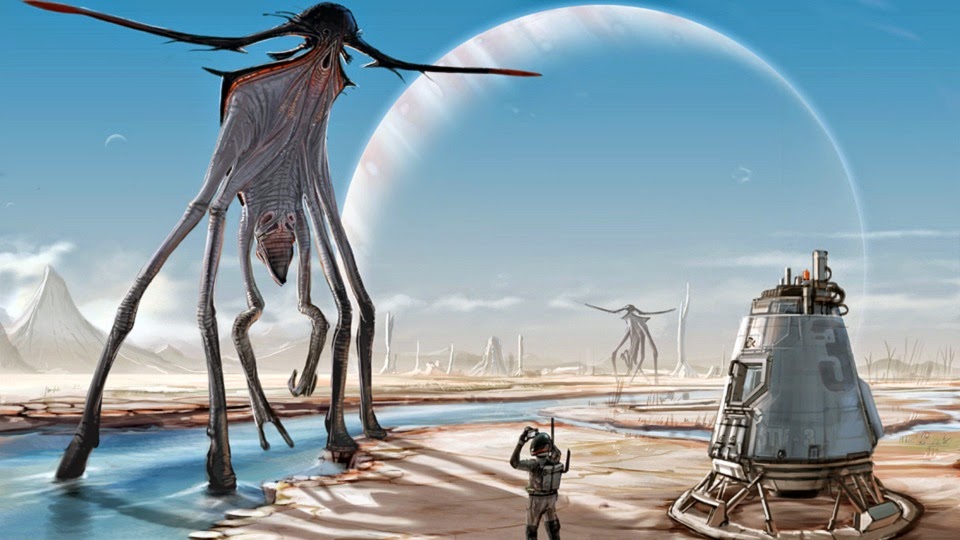 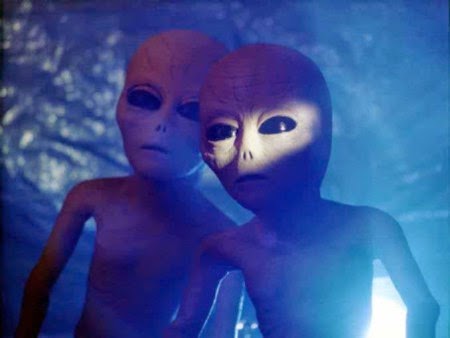 I am sure there are aliens that are filled with kindness and compassion as I am sure there are others that would reach over and bite your head off if hungry and not see a problem with it. Like life on this planet life across the universe comes in many shapes and forms with many ways of living and many standards for what is right or wrong. It will be our dismay and our ignorance to these facts that will be our outcome if we continue to give and insist that aliens follow , think.  live or behave as we do. Aliens are NOT humans stop trying to hold them to human feelings , compassion , culture or life style as all that will do is leave you incredibility shocked and disappointed when it does not turn out they have any of those qualities.

On top of all of the varied life forms that  most likely fill our cosmos there is the added possibility that there are many forms of life that have combined with machines or robots making them half machine half biological life forms and others simply robots that have long ago taken over once living life forms. All of these options are possible many probable .

The main thing for us is to realize that what we do not know what is out there and it is  important we open our minds to all possible things so that when we start to deal with the other forms of life in our universe we are able to absorb and understand what we may be facing in a logical ready manner and not remain closed minded which will only keep us stunted and unable to cope with what may come our way.