My last article I showed that Sebastian Bourdon’s Lamentation of Christ had Mary Magdalene with two little children (cherubs) sitting next to her. The one child touches the crown of thorns while the other looks at the dead Christ.

Poussin ‘s Lamentation of Christ is similar to Bourdon’s which has a woman (Mary Magdalene) comforting Mother Mary with two children weeping one cherub with wings and the other a boy child with red hair. Magdalene and children are rose colored.

Poussin tricks the eye with the white drape near the boy child but he has no wings. These children may represent the Holy Grail. The bloodline of Jesus’s family  as some writers have written such a Baigent Lincoln and Leigh in Holy Blood Holy Grail. Poussin and Bourdon may have placed the children (cherubs) rosy and healthy next to the dead Christ as a sign of the Line of the Rose (Magdalene or Mary of Bethany’s children) or other Holy family children.

It seems there are more artists who have the two winged cherubs. I just recently saw the Vatican Splendor exhibit in St Louis which had Michelangelo’s two Pietas’. The earliest is the most famous of the very young Mother Mary holding the dead Jesus in her lap. The second Collona Pieta was done later by Michelangelo for his dearest friend Vittoria Collona which has Mother Mary hands raised to heaven with two children holding Jesus’s arms in right angles. Just recently the announcement of a painting of this Collona pieta was discovered here in America. It was owned by a German Baroness Villani and inherited by a American family who did not know its worth. It is called Pieta Bread. It could be one of the great discoveries of the year.

Collona Pieta  has Mother Mary hands raised to heaven with two children holding Jesus’s arms in right angles.  Vittoria Collona was a passionate friend of Michelangelo. He spent many hours with her and wrote sonnets to her. Vittoria made friends with Bernardino Ochino and Juan de Valdes. This group wanted to reform the Catholic religion which was riddled with corruption. The Inquisition tried to arrest and kill Ochino but he escaped. He converted to Protestantism. Ochino wrote

He wrote it in England the dialogue has Lucifer angry at Christianity’s spread and his placing the Antichrist as Pope. He tells how Henry the VIII was brought by heaven to overthrow the church. Vittoria urged for reform in the church but died a devout Catholic

In the Collona Pieta Mary’s hands are raised to heaven in prayer. Jesus lies between her legs (symbolizes birth and death) with his hands pointed downward. The Collona Pieta shows the (female) full of life and the (male) dead intertwined together. What makes it powerful is this mixture of opposites and then there are the children. Everyone sees two cherubs holding Jesus up by his arms. An indoctrinated peasant in the 1500’s would see cherubs holding Christ. Is this Michelangelo’s way of giving a dual message to the viewer in the future or the initiated? Michelangelo purposely shows the one child’s back which has no wings. Who are these children who stand like two pillars holding Jesus up? Boaz and Joachim were pillars in the Temple of Solomon. In Kabbalah in the tree of life they represent mercy and strength. Pythagoras and Hermes Trismegitus said they helped discover geometry and Freemasons say they represent the development of the spirit of man. It reflects the Vittoria’s view of how essential Mother Mary is coredemptrix in her suffering. Another view is do these children symbolize Jesus’s family ? Is this a style or a teaching these men had knowledge from their patrons?  Rafaell has a peculiar picture with the Madonna holding Jesus with John the Baptist looking on with another child saint. Art historians say the child saint could be James the Less. Yet the title of the artwork is Madonna, St John the Baptist, and Jesus with Child Saint. It doesn’t say James the Less in the title. It is open to debate. Is the child a he or a she? The candidates could be James the Just, Thomas Didymus (Twin), James the Less, or Jesus sister. The child is part of the family and has the halo of a saint. Michelangelo did one more pieta when he was 73 and it is called the Florentine Pieta. It had Joseph Arimethea (Nicodemus), mother Mary, Mary Magdalene holding the dead Jesus. It is said Joseph Arimethea’s face is the aged Michelangelo. Mary Magdalene is supporting Jesus on his right side and his mother on the left. The Collona pieta and the Florentine Pieta are alike in the fact there are four characters in the picture. Rome was filled with corruption. The Protestant church was gaining headway in Europe. Joseph Arimethea  is connected with the Arthurian legend of the Holy Grail. The earliest mention of Joseph’s travels is by Rabanus Maurus Magnentius the archbishop of Mainz. He wrote this in the 800’s

“that Joseph of Arimathea was sent to Britain, and he goes on to detail who travelled with him as far as France, claiming that he was accompanied by “the two Bethany sisters, Mary and Martha, Lazarus (who was raised from the dead), St. Eutropius, St. Salome, St. Cleon, St. Saturnius, St. Mary Magdalen, Marcella (the maid of the Bethany sisters), St. Maxium or Maximin, St. Martial, and St. Trophimus or Restitutus.”

The authentic copy is housed at Oxford. William of Malmesbury a historian in the 12th century that Joseph was sent by Saint Phillip the apostle to Britain. William says that the 12 apostles founded Glastonbury Abbey. Cardinal Caesar Baronius (1609) a Vatican

This corresponds with the French oral tradition as well. The Celtic church was established in Ireland, Britain, and France which denied the rule of the Pope, friendlier to women, more connected to nature, less authoritarian, and easily adapted the ancient religion of the people. Michelangelo has balance in the Florence Pieta with the women taking an equal part in his pieta. These four people were there when Jesus died. 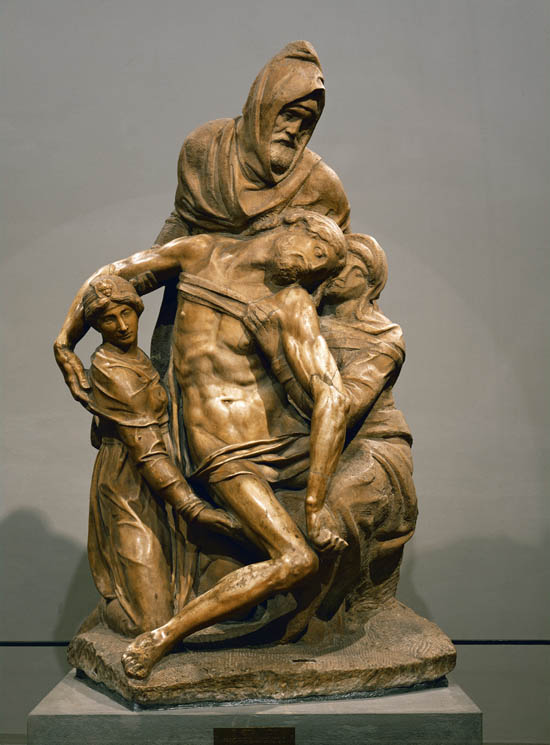 Tizian did a Pieta too which had two cherubs. They both have wings one holds the torch and the other is looking in a urn. The tomb contains statues of Moses carrying the commandments and Sybil crowned carrying a cross. One of the Sybils (oracle) had predicted the coming of Jesus. Mary Magdalene, Nicodemus (Joseph Arimethea) Mother Mary holding Jesus in her lap. Up above in gold ceiling the symbol is of the Pelican feeding its young with its own blood? The words inscribed on the tomb “Too true it is, alas, that no man’s life may be counted happy until its close!”

In the Renaissance times the artists were given access to the great libraries of their Cardinal patrons. The church under Pope Alexander VI saw great corruption by the Borgia families. The execution of, Girolamo Savonarola and the papal bull allowing Spain and Portugal to enslave the natives of the countries in the New World were just a few examples of the Vatican’s corruption. We see these two little children (cherubs) being painted by some of the great artists of the time. The children (cherubs) seem to be connected to the women in mourning over the death of Jesus. The recent discovery of the lost Michaelangelo
found in New York is an amazing story. We see Mary and one of the children dressed in a rose color and the other child in purple. The color purple is for royalty and another reference to the Rose Line perhaps. The number four keeps coming up which may represent the four elements earth, fire. water. and air. Four can mean the four cardinal points East, West, North and South. The viewer  of these artworks gets the chance to participate and view these artworks with more freedom than the peasants of the Renaisance. I wanted to show in this article that the great masters had a recurring theme with their two little children (cherubs). One wonders if they knew about the Line of the Rose or tales of the Holy Grail.